Ultra-long polymers are used in high-performance applications including energy-efficient lubricants, working fluids for energy production, and performance plastics. Despite their broad use, these polymers are often degraded by extreme flows and mechanical processes that break chemical bonds along the “spine” of the polymer chain.

Motor oil in your car is a good example, explains Matthew Helgeson, associate professor of chemical engineering at UC Santa Barbara: “Polymer additives are engineered to control the viscosity of the oil and maintain its load-bearing characteristics, but if polymer degradation is too severe, the oil loses its effectiveness, resulting in poorer fuel efficiency and increased engine wear.”

To counteract such degradation and the resulting compromised performance, engineers have designed complex polymer shapes, including branched or star-like architectures that are less susceptible than straight polymer chains to damaging shear forces encountered in flow environments.

Until now, to understand the impacts of molecular geometry on polymer deformation and degradation under extreme shear, researchers have had to rely on indirect experiments; methods did not exist to characterize polymer structure and deformation while they were being subjected to extreme flows. Instead, researchers could only infer those properties from measurements made after the flow was stopped and the degraded material was collected.

With the support of a new $800,000 grant from the U.S. Department of Energy (DOE), however, Helgeson and collaborators from the Renssalaer Polytechnical Institute in New York and the National Institute of Standards and Technology seek to use new experiments and molecular simulations to expand their understanding of polymer performance in extreme flows. Specifically, they seek to know how polymer topology (shape and structure) affects polymer deformation at very high shear rates, and how the deformation drives the breakage of chemical bonds along the polymer backbone.

The project will involve combining in situ small-angle neutron scattering (SANS) measurements with molecular simulations and scattering models that make it possible to observe and develop theories for deformations of single molecules of polymers at extreme shear rates, something never before achievable from experiments. The findings will be applied to families of topologically complex polymers, with synthetic control being used to understand how the type and degree of branching on a polymer influence the distribution of molecular deformation and tension under extreme shear.

The research requires both computer simulations, which will be made at Renssalaer in the research group of Prof. Patrick Underhill, and new experimental instruments, made by Helgeson’s group, that can subject polymers to very large shear rates and then measure the resulting deformation and breakage in situ during flow. The UCSB team will combine this innovative approach with advanced synthetic capabilities for engineering consistent molecules to understand the role that their unique geometries play in their flow behavior.

“The new capillary rheo-SANS device we have been working on with collaborators at NIST makes it possible to place a neutron beam in flows that are three or four orders of magnitude stronger than is possible with existing devices, providing unprecedented information about how molecules become distorted and deformed by the flow,” Helgeson says. The device involves a high-power pump that attains extreme flow rates connected to a long coil of narrow tubing made with materials and in dimensions carefully chosen to be permissive to beams used in neutron scattering measurements.

“I think these new experiments could really help to understand the mechanism of how forces on complex shaped polymers affect their breakage,” Underhill said. “In the simulations, we calculate the tension forces on the different parts of the molecule. The hypothesis is that, if we have a star-shaped polymer, for instance, the different branched arms distribute the tension better than if it’s just a straight polymer.”

Helgeson, who in July received the Science Prize from the Neutron Scattering Society of America for related work, notes that, while experiments and simulations on this project will be occurring in parallel, some of the experiments will be “benchmarking" studies to establish what are the right parameters for some of the simulations. “The goal of these studies is to get quantitative agreement for a material where we ‘know’ the answer, so that simulation can then be used to predict behavior or observe things that cannot be observed in the experiments,” he says.

Ultimately, these studies will provide guidelines for engineering polymers to enhance mechanical stability or, conversely, to engineer flows that direct the mechanical degradation of polymers for targeted materials properties and applications. Furthermore, the new neutron scattering tools developed in this project will be made available to other users at NIST and other neutron facilities, potentially extending the potential for breakthrough science in extreme flows to other materials and engineering challenges.

"We envision that capillary rheo-SANS will enable unprecedented access to structural information at extreme shear rates,” said Katie Weigandt, a beamline scientist at the NIST Center for Neutron Research. “The information is of importance for fundamental academic research and industrial applications throughout the pharmaceutical, specialty-chemical, and petroleum industries, for example." 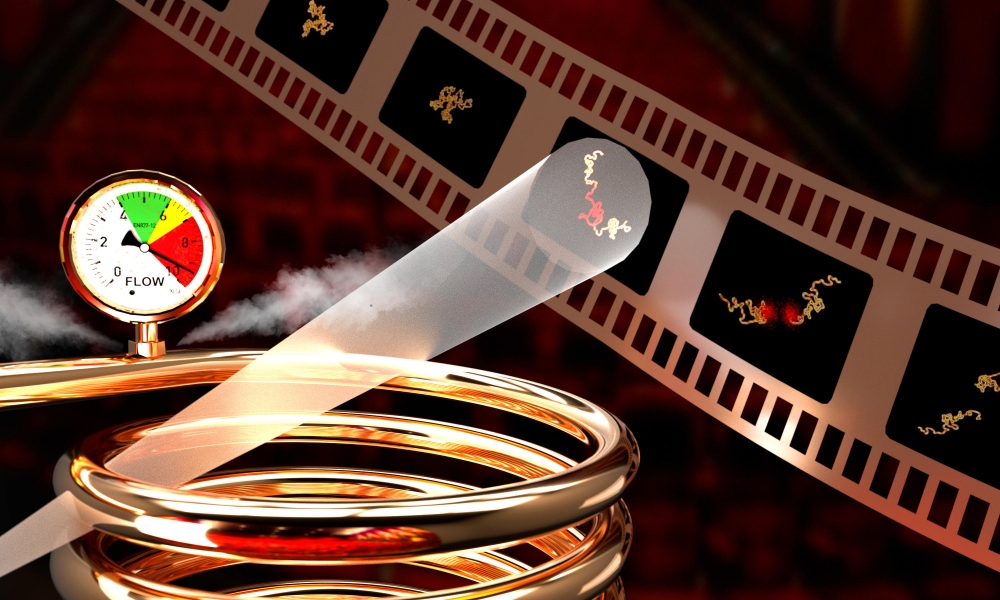 Caption: Artist’s concept illustration depicting a neutron scattering beam equipped with the new capillary rheo-SANS device being used to probe the deformation and breakage of polymers as they are exposed to extremely strong shear flows. Illustration by Brian Long