Nearly 240 million doses of the Pfizer-BioNTech COVID-19 vaccine have been administered in the United States since the Food and Drug Administration (FDA) issued an Emergency Use Administration (EUA) in December 2020 to help curtail the pandemic. The vaccine, now called Comirnaty, became the first FDA-approved COVID-19 vaccine for patients 16 years and older on August 23 of this year. The recommendation came after a months-long, multinational, placebo-controlled trial showed results that met the agency’s high standards for safety, effectiveness, and manufacturing quality. Results from the clinical trial showed that the vaccine was 91 percent effective in preventing COVID-19 disease. A key member of the vaccine development effort at Pfizer was Nikki Schonenbach, who received her PhD in chemical engineering from UC Santa Barbara in 2017.

“There were many, many motivations to work on this project; the highest priority was simply the rapid spread and devastating effects COVID-19 had on so many lives,” said Schonenbach, who was a key member of the in vitro transcription (IVT) process development team. “When asked if I felt comfortable joining this team and potentially risking my own health to perform critical lab work on site, there was no question. This was my opportunity to help. As a whole, this entire well-functioning team both challenged and supported the members in their knowledge development. Every member was critical.”

Schonenbach designed experiments, analyzed data, and presented the results to the wider team, earning the unofficial title of “Lab Captain” to lead experiments at the laboratory scale that were critical to the scale-up and robustness of the characterization process.

“My efforts, along with those of our entire team’s efforts, ultimately enabled our applications for regulatory approval,” she said.

Comirnaty contains messenger RNA (mRNA), a kind of genetic material. It is used by the body to make a mimic of one of the proteins in the virus that causes COVID-19. The result of a person receiving the vaccine is that their immune system will ultimately react defensively to the virus that causes COVID-19. The mRNA is present in the body for a short time and does not become incorporated into or alter an individual’s genetic material in any way.

“Part of the beauty of mRNA as a therapeutic is that there are so many opportunities for treatment areas,” she explained. “In the vaccine space, as we have demonstrated with COVID-19, we can scale up and manufacture a vaccine faster than ever before in response to a global pandemic. Unlike traditional vaccines, an mRNA vaccine does not contain a viable virus at any point in the manufacturing process, so there is no chance of catching the virus from the vaccine that is meant to protect you.”

Her supervisor at Pfizer, Khurram Sunasara, described Schonenbach as “one of the key thought leaders in the mRNA space,” playing a critical role in the COVID vaccine program and now for future mRNA programs. As a result of her efforts during the vaccine development process, she was promoted to principal scientist.

“I am honored beyond words to be a part of this team,” Schonenbach said. “My time at Pfizer has been the time of my life, and I feel so lucky to have been able to get involved and stay involved with our efforts in mRNA therapeutics. We have pushed the envelope for mRNA vaccines a great deal in the past year, but there is still so much to learn and develop in vaccines and other therapeutic spaces.”

Schonenbach was co-advised at UCSB by chemical engineering professors Michelle O’Malley and Songi Han. Her research focused on characterizing pharmaceutically relevant membrane protein complexes to link changes in structure and dynamics to function. Namely, she worked with a G protein-coupled receptor called the adenosine A2a receptor, which regulates cardiac function and several processes within the central nervous system. She describes much of her work in graduate school as “RNA adjacent,” as she did not work with RNA prior to Pfizer.

“Several things I learned and was proficient in became of tremendous use at Pfizer,” she said, citing her significant experience with different types of cloning techniques, molecular biology, and cell culture work, as well as handling proteins sensitive to degradation. “I had mastered techniques at UCSB that were helpful in working with RNA, which is sensitive to degradation if handled improperly. My experience also helped me to implement lab protocols for our team to follow in the COVID-19 development labs at Pfizer.”

Her former advisors are not surprised to see Schonenbach blazing a trail at Pfizer.

“Nikki was the first PhD student in my lab, and she built lots of equipment and became a leader in my group in her first year!” said O’Malley. “She is amazingly resourceful, a great team player, and has a lot of ‘grit’ that makes her resilient to challenges.”

“Nikki’s success is very much rooted in the College of Engineering emphasis on the importance of developing fundamental skills and carrying out basic research first,” said Han. “As contradictory as it may sound, achieving high impact through science does not necessarily come from a UCSB student focusing on applied science or tackling society's challenges head on during their PhD studies, but rather from the development of the ground work, the basic skills, state-of-the-art tools, perseverance, leadership, and a fundamental understanding of the problems and the mechanisms. This is what UCSB's program emphasizes and what Nikki full-heartedly embraced.”

Schonenbach hopes that current and future students see the endless opportunities that are available to them from a UCSB education.

“UCSB has excellent educators and principal investigators who conduct research across a broad range of engineering, chemistry, and physics that is invaluable to the real world,” she said. “I am far from the only alumna making an impact, or the only graduate working on the COVID-19 vaccine.” 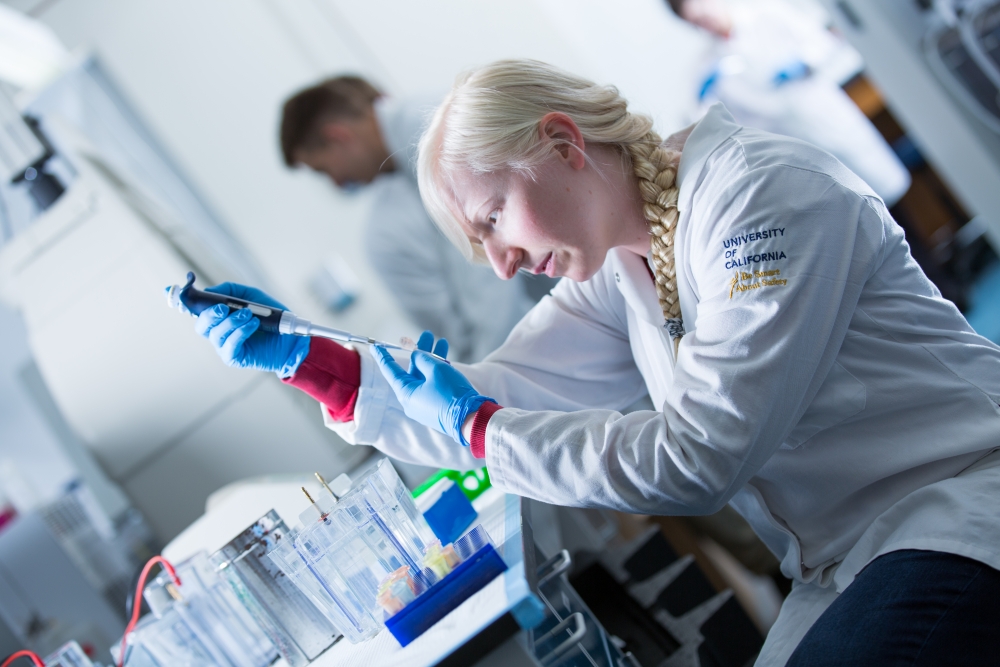