Daniela Rivera Mirabal (pictured on left) and Vedika Shenoy (pictured on right), placed first and second in the student poster competition during the 2020 Undergraduate Student Conference hosted by the American Institute of Chemical Engineers (AIChE). The two UC Santa Barbara undergraduate researchers presented work they did while participating in the Future Leaders in Advanced Materials (FLAM) Program, which is offered through UCSB’s Materials Research Laboratory (MRL). The program allows science and engineering students from UCSB and other universities to conduct summer research projects, while working closely with graduate students, who serve as mentors, and faculty sponsors.

Rivera Mirabal took first place in the Materials Engineering & Sciences IV category, and Shenoy finished runner-up in the Education and General Papers category at the AIChE Student Conference. Students from more than one hundred institutions participated in the four-day event, which took place virtually this year due to the COVID-19 pandemic.

“I am extremely honored, and it feels fantastic to be recognized and know that my hard work has paid off,” said Shenoy, a third-year chemical engineering student at UCSB. “I am incredibly grateful for all of the support that I have received in my research at UCSB.”

“It is an honor to be recognized for my work by such a prestigious organization,” said Rivera Mirabal, a senior chemical engineering major at the University of Puerto Rico at Mayagüez. “I am grateful for my wonderful mentors who have led me to become the researcher I am today, as this award is for them as much as it is for me. I am also proud to represent my island and hope to inspire more people from Puerto Rico to participate in the coming years.”

Rivera Mirabal started her research collaboration with UCSB this past June as a FLAM intern. Sponsored by UCSB chemical engineering professor M. Scott Shell, the John Meyers Founder's Chair of Chemical Engineering, and mentored by Sally Jiao, a chemical engineering PhD student, Rivera Mirabal has continued her research project virtually this fall. Her award-winning presentation, “Molecular Dynamics Simulation of Polypeptoids Reveal the Effects of Chemistry and Topology on Local Water Behavior,” discussed findings on how variations in realistic surfaces can impact local water behavior. The results were obtained from computer simulations she conducted to better understand the molecular dynamics and behavior of water near polypeptoids, which are non-natural, sequence-specific polymers that offer the opportunity to probe the effect of sequence on functional properties. She looked into the impact that a polypeptoid’s shape and chemical composition, such as whether it tends to attract or repel water, can have on the movement and arrangement of water.

“We found that both the polypeptoid chemistry and shape affect how nearby water is structured, and that the chemistry affects how quickly water moves,” said Rivera Mirabal.  “We are comparing these findings to other experimental results and hope this will provide insight to tackle important challenges regarding water treatment technologies.”

Rivera Mirabal said that, before working with UCSB, her previous research experience had been experimental work, not computational and that Jiao and Shell have taught her the skills she needed to succeed as a computational researcher — and as an individual.

“My experience at UCSB has exceeded all expectations. Since my first day, everybody has welcomed me with open arms. I have received great mentorship from graduate students and faculty, who along with the FLAM team, ensured my virtual experience was nothing short of a traditional in-person internship,” said Rivera Mirabal, who plans to continue pursuing projects at the intersection of computational and experimental research while in graduate school next academic year.

Shenoy’s presentation, titled “Designing and Characterizing a 3D Printed Staggered Herringbone Mixer,” discussed her work to develop a faster and cheaper method for using 3D printing to fabricate staggered herringbone mixers. The staggered herringbone mixer, which uses repeated patterns of grooves, has proven to be an efficient passive mixer of microfluids. The extremely promising mixer has many applications in biomedical diagnostic platforms, such as isolating tumor cells and performing assays on blood samples. 3D printing serves as an attractive alternative to conventional microfluidic fabrication techniques, such as photolithography, because it speeds up fabrication time from days to hours. However, existing 3D printers cannot achieve the sub-100 micrometer feature sizes enabled by photolithography. They also suffer from printing inaccuracies and print-to-print variations, which become significant at smaller scales. Shenoy presented her team’s research, which was intended to eliminate those weaknesses.

“We have developed methods to calibrate 3D printers to enable more accurate printing, and we also redesigned the staggered herringbone to length scales that are achievable through 3D printers,” she explained. “We found that these redesigned mixers with larger feature sizes still functioned well and were additionally robust against the variation that occurred between print cycles.”

Shenoy has worked as an undergraduate researcher at UCSB since her freshman year, when she joined the research groups of mechanical engineering professor Megan Valentine and Matt Helgeson, an associate professor of chemical engineering. Still a member of those labs, Shenoy interned last spring for the MRL’s Research Internships in Science and Engineering (RISE) program and for FLAM the past two summers. Through this work, she participates in the MRL’s Interdisciplinary Research Group 3 (IRG-3), co-led by Valentine and Helgeson. IRG-3 focuses on discovering how material assembly and innovative processing can help to establish the foundational design rules for creating versatile soft materials for eventual use in advanced fabrics, packing, additive manufacturing, and tissue replacements. Since June, Shenoy has also been working on a computational project under the supervision of Saeed Najafi, an IRG-3 postdoctoral researcher. The project uses simulations to study the phase behavior of charged polymer systems. Shenoy expressed gratitude to Helgeson, Valentine, as well as those involved with RISE, FLAM, and IRG-3.

“Conducting research as an undergraduate has been incredibly rewarding for me, as I’ve received the chance not only to contribute to a project that interests me, but also to develop my problem-solving skills,” said Shenoy. “This experience has definitely solidified my interest in attending graduate school, and while I’m still developing my research interests, I would definitely like to continue working on research in the same area as what I am currently doing.”

A third UCSB researcher associated with FLAM, Chelsea Edwards, who was Shenoy’s mentor, earned first place in the Materials Engineering & Science Division’s Graduate Student Poster Competition at the AIChE Annual Meeting. Edwards is a third-year chemical engineering PhD student at UCSB and a member of the Helgeson research group. 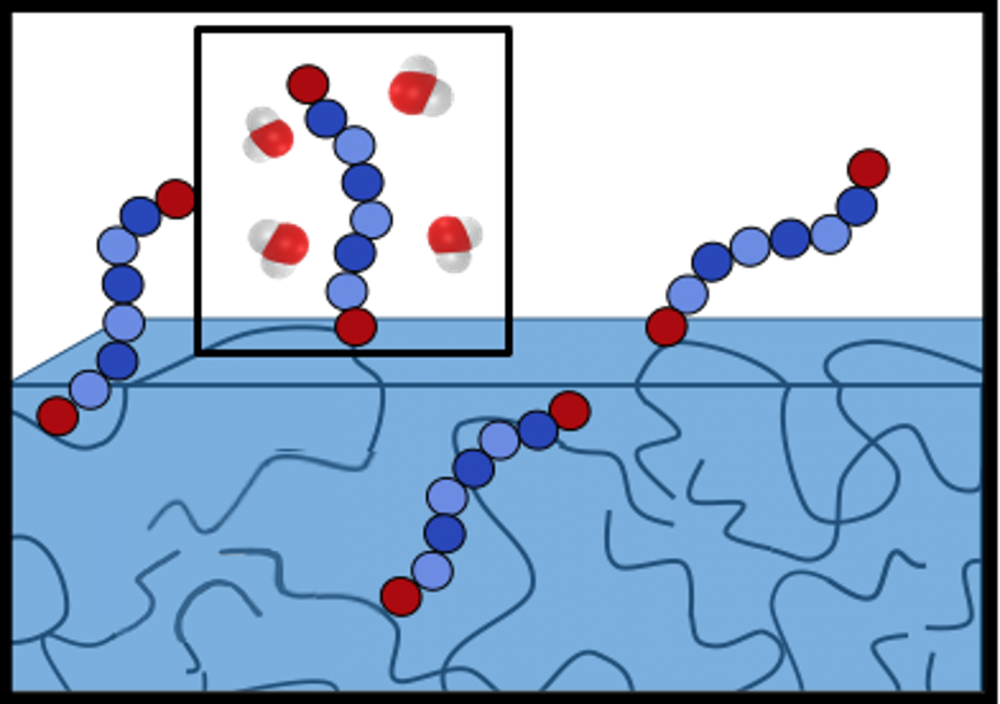 Caption: Model of the polypeptoids attached to a surface, which emulate surface functionality effects on water behavior. The results presented at the AIChE poster were on the lone polypeptoids in solution, yet current work is being done on these tethered to a surface. 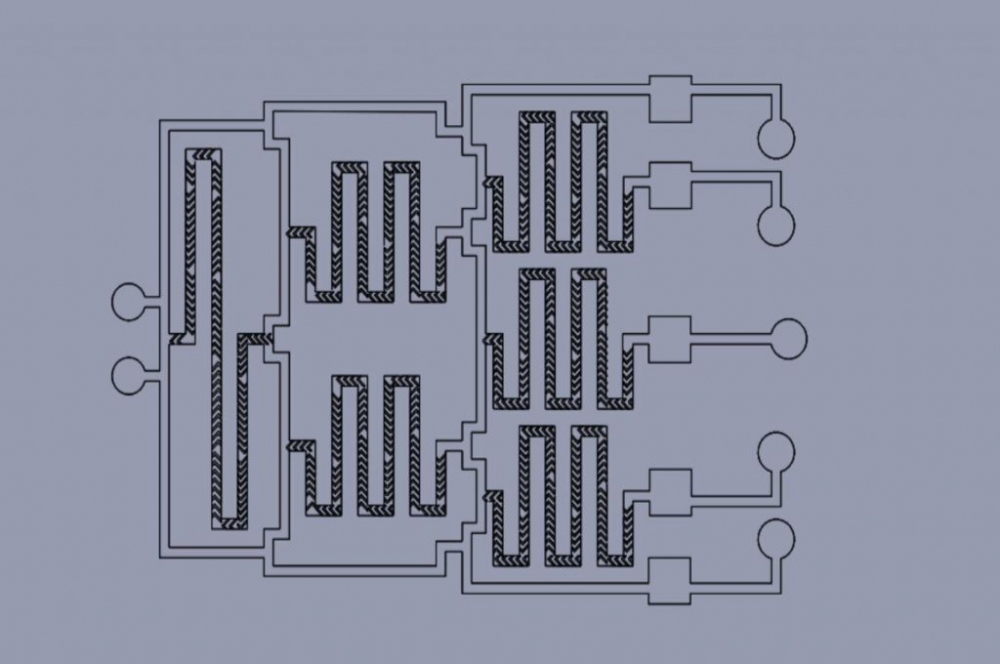